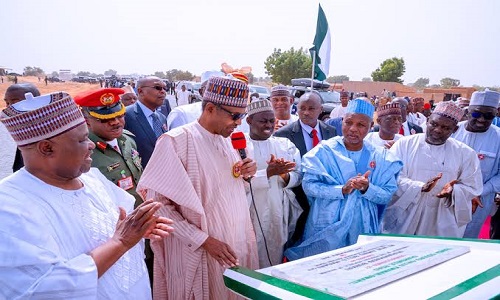 At exactly 12.15pm on Monday, President Muhammadu Buhari performed the ground breaking of the Transportation University in Daura, Katsina State.

The proposed specialised institution is said to be the first in Africa.

Buhari described the event as a demonstration of his administration’s commitment to expand the modernisation of the railway as it ensures the development of indigenous capacity to manage infrastructure.

He lauded Messrs China Civil Engineering Construction Corporation (CCECC) Ltd. – the sole investor – saying that the school will go a long way to cement the healthy bilateral relationship between the two nations.

The president said the administration will continue to work towards promoting Executive Order 005, which seeks to promote local content in engineering, technology and other related fields.

According to him, the proposed university will domesticate railway engineering, thereby saving the country fortunes as it will create employment opportunities.

By establishing the varsity and the wagon assembly plant in Nigeria, the country would have addressed the issue of capacity development in maintenance of the rolling stocks as well as conserving the funds that would have gone to sourcing them from outside the shores of the land.

He thanked Governor Aminu Bello Masari for approving 413 hectares of land for the project, saying that the Federal Government will do everything to support the smooth takeoff of the project.

Buhari restated his government’s determination to sustain all investments in the railway, describing the sector as the most critical to unlock the nation’s potential.

Masari expressed his state’s delight in hosting the proposed university, adding that his government would facilitate its kick-off.

Education Minister Mallam Adamu Adamu said his ministry was delighted about the coming of the proposed specialised university.

Adamu, who was represented by the Minister of State for Education, Mr. Emeka Nwajiuba, said the ministry alongside the National Universities Commission (NUC), would be eager to assist in developing the curriculum of study for the many colleges that would evolve in the school, assuring , the NUC on its own, will not find it a challenge accrediting the school.

“The Ministry of Education, NUC and other relevant agencies will be very happy to examine and approve all programmes to be put out for study here,” he said.

The Ambassador of the People’s Republic of China to Nigeria Dr. Zhou Pingjian, said China was happy to see Nigeria’s determination to scale up its investments in railway modernisation with the establishment of the first Wagon assembly factory on September 9, as well as the University of Transportation for the development of manpower locally.

He said: “China remains committed to working with Nigeria to support industrialisation especially the modernisation of the railway and support the nation’s aspirations for sustainable development.”

Transportation Minister Rotimi Amaechi recalled the criticism he got for choosing Daura, President Buhari’s country, as site for the varsity.

Amaechi said he was happy bearing the punches of those who called him a sycophant, knowing that the “ultimate goal is to provide avenue for the training of manpower to maintain government’s growing investments in the rail sector.

He said: “Daura is in Nigeria. So, what is wrong in sitting a university in Daura? I have no problem in being labelled by those who felt I wanted to use it to curry the favour of Mr. President, because I know that you can’t be a sycophant with this President.”

Describing the university as a product of his imagination, the minister said: “I insisted on the railways and when we wanted to sign the Ibadan to Kano standard Taige rail line, I said I will not sign if they did not agree to establish a university here in Nigeria. Today, that dream Mr. President is a reality.

Besides the university, Amaechi said he was also able to extract from the CCECC, scholarship facilities for the training of young Nigerians.

He said: “As at today, 150 Nigerians who are studying various aspects of engineering related to rail services and they would be trained from undergraduate to PhD levels and these it is expected would return to take up employment at the university to train other Nigerians locally.

“The other promise I was able to extract from the CCECC is the setting up of the wagon assembly factory where we can be able to build locally locomotives and wagons, instead of travelling abroad every time we need to buy these rolling stocks.”

He thanked the governor for approving 413 hectares of land at Sandam Local Government Area in the Daura Emirate for the construction of the school.

“Though we asked for a thousand hectares we are happy that we have 413 hectares to work with and we assure you that this will be transformed in a short while,” Amaechi said.

CCECC’s Managing Director, Jiang Yigao thanked the government for supporting the initiatives being introduced into the nation’s rail sub-sector by his company.

He said the university has been designed to have four basic areas which he listed as teaching, living, library and sports, adding that the company will collaborate with the appropriate agencies to develop appropriate faculties for the training of Nigerians.

The Emir of Daura, who was represented by the Galadima of Daura, Alhaji Ahmad Diddiri, said the emirate will forever be grateful to the Federal Government for citing the university in his domain.