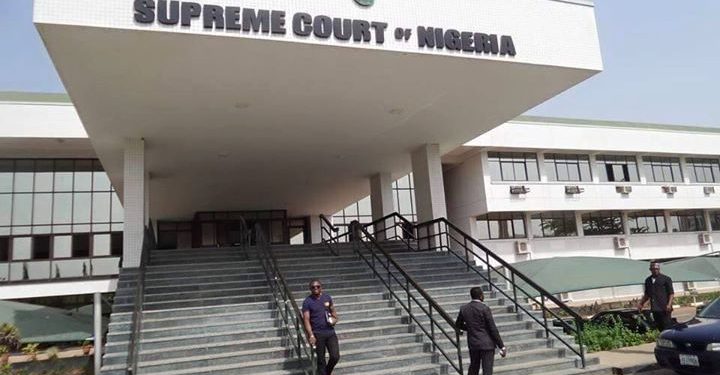 Ill health by a Justice of the Supreme Court on Monday halted proceedings in seven governorship election petition appeals.

Besides, a huge crowd, largely unruly, temporarily stalled the matter before Chief Justice of Nigeria (CJN) Justice Ibrahim Muhammad, who led the seven-man panel hearing the suit, announced that one of the panel members was feeling unwell.

The CJN subsequently told a packed court that the panel would rise briefly to return shortly after.

About one hour later, instead of the panel returning, an official of the court announced to a disappointed audience that proceedings had been rescheduled for today.

The anxiety in the states had to continue for another 24 hours. But, tension enveloped the Supreme Court yesterday before proceedings were abruptly terminated

A the Justices filed in and took their seats, the CJN halted proceedings because of too much noise and rowdiness in court.

Justice Muhammad said the court would not resume until calm was restored.

The rowdiness was informed by the large audience made up of politicians, their lawyers and supporters, who defied instruction from the court’s security personnel and went about struggling for the limited seats available in court.

Many also struggled for the inadequate standing space and refused to be restrained by the security men on duty.

Calm was later restored in the courtroom after security men evicted some of those who were not lawyers.

When the court resumed sitting around 9:20am, Awomolo apologised to the Justices.  Reacting, Justice Muhammad said: “It is alright, but we went out for a different purpose, and when the purpose was achieved, we came back.”

The business of the day then commenced with the calling of the Ganduje versus Abba Yusuf,  in respect of the Kano dispute

After the case was called, lawyers to parties – Abbah Yusuf and  Adegboyega Awomolo (SAN) — identified and adopted their briefs of argument. After that, the CJN announced the illness of the Justice and ended it all.

Although the appeals were listed for hearing, many had thought the court would deliver judgments. Going by what happened last Wednesday when the court heard and rendered judgments in four governorship election appeals.

In respect of the Imo governorship dispute, there are four appeals, with the first, filed by Ifeanyi Ararume of the All Progressive Grand Alliance (APGA).

The second is by Senator Hope Uzodinma of the APC and Uche Nwosu of the Action Alliance (AA). Governor Ihedioha who won at both the tribunal and the Court of Appeal, also filed a cross-appeal, with which he is challenging the minority judgment of the Appeal Court, that gave victory to Senator Uzodinma of the APC.

In Sokoto State, the governorship candidate of the APC, Ahmed Sokoto, in his appeal, is challenging the declaration of Tambuwal as the valid winner.

Tambuwal, who won the election with a slim margin of 342 votes after a supplementary poll, and was declared winner by both the tribunal and the Appeal Court, also filed an appeal.

In Bauchi, the former governor, Mohammed Abubakar apppealed against the election of former Minister of the Federal Capital Territory (FCT), Bala Mohammed

For Benue State, the governorship candidate of the APC, Emmanuel Jime, has an appeal against Ortom.

Ortom, who won at both the tribunal and the Court of Appeal, equally filed a cross-appeal.

FG to Issue Guidelines on Implementation of Finance Act