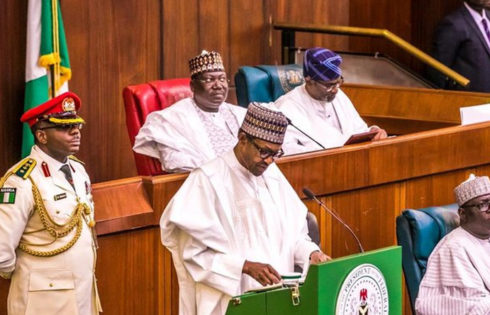 President Muhammadu Buhari on Tuesday proposed the highest allocation of N262bn to the Ministry of Works and Housing, just as Power, Transportation and Defence followed with N123bn, N112bn and N100bn, respectively in the 2020 budget estimates presented to the National Assembly.

These are some of the details of N10.33tn budget for the 2020 which is N1.4tn higher than the N8.9tn approved by the National Assembly for the 2019 fiscal year.

The President in the speech, tagged ‘Budget of Sustaining Growth and Job Creation’, which he delivered to the joint session of the federal parliament, said the expenditure estimates included statutory transfers of N556.7bn.

At the presentation attended by members of the Federal Executive Council, Buhari announced the non-debt recurrent expenditure of N4.88tn and N2.14tn capital expenditure (excluding the capital component of statutory transfers).

The National Assembly had while approving the 2020 – 2022 Medium Term Expenditure Framework and Fiscal Strategy Paper last week proposed N10.729.4 as total expenditure for the 2020 budget.

Buhari also said debt service was estimated at N2.45tn, and that a provision of N296bn was made for the Sinking Fund to retire maturing bonds issued to local contractors.

On statutory transfers, Buhari said N125bn was proposed for the National Assembly and N110bn for the Judiciary.

Other details of the estimates are N44.5bn for the Basic Health Care Provision Fund; N111.79bn for the Universal Basic Education Commission; and N80.88bn for the Niger Delta Development Commission, now under the supervision of the Ministry of Niger Delta Affairs.

He added that the budgetary allocation to the National Human Rights Commission had been increased from N1.5bn to N2.5bn to enable the commission to perform its functions more effectively.

Buhari said all agencies must obtain necessary approvals before embarking on fresh recruitment.

He said the projections were seven per cent higher than the 2019 comparative estimate of N7.594tn inclusive of the government-owned enterprises.

He said, “The increasing share of non-oil revenues underscores our confidence in our revenue diversification strategies, going forward.”

Buhari also explained that overhead cost was projected at N426.6bn in the 2020 budget while additional provisions were made only for the newly created ministries.

He said, “The respective heads of the MDAs must ensure strict adherence to government regulations regarding expenditure control measures.

“The proliferation of zonal, state and liaison offices by federal ministries, departments and agencies with attendant avoidable increase in public expenditure, will no longer be tolerated.”

Speaking further on capital expenditure, Buhari said, “Investing in critical infrastructure is a key component of our fiscal strategy under the 2020 budget proposals.”

He also said, “An aggregate sum of N2.46tn (inclusive of N318.06bn in statutory transfers) is proposed for capital projects in 2020.

According to him, at 24 per cent of aggregate projected expenditure, the 2020 provision falls short of the 30 per cent target in the Economic Recovery and Growth Plan 2017-2020.

He said, “Although government’s actual spending has reduced, our plans to leverage private sector funding through our tax credit schemes will ensure our capital programmes are sustained.

“For example, we launched the Road Infrastructure Tax Credit Scheme, pursuant to which I have approved the construction and rehabilitation of 19 roads and bridges of 794.4km across 11 states.  Indeed, the scheme has attracted private investment of over N205bn and the first set of tax credits are being processed by the Federal Ministry of Finance, Budget and National Planning.

“Under the Presidential Power Initiative, we will modernise the national grid in three phases; starting from five gigawatts to 7GW, then to 11GW by 2023, and finally 25GW afterwards in collaboration with the German Government and Siemens.”

Buhari said budget deficit was projected to be N2.18tn in 2020 including drawdown on project-tied loans and the related capital expenditure.

He said the figure represented 1.52 per cent of estimated Gross Domestic Product,  well below the three per cent threshold set by the Fiscal Responsibility Act of 2007, and in line with the ERDP target of 1.96 per cent.

He said the deficit would be financed by new foreign and domestic borrowings, privatisation proceeds, signature bonuses and drawdowns on the loans secured for specific development projects.

He said, “We provided the sum of N2.45tn for debt service. Of this amount, 71 per cent is to service domestic debt which accounts for about 68 per cent of the total debt. The sum of N296bn is provided for the Sinking Fund to retire maturing bonds issued to local contractors.

“I am confident that our aggressive and re-energised revenue drive will maintain debt-revenue ratio at acceptable and manageable levels. We will also continue to be innovative in our borrowings by using instruments such as Sukuk, Green Bonds and Diaspora Bonds”.

Buhari announced a slash in the Social Investment Programmes from the annual N500bn to N30bn.

He said despite the reduction in the SIP from N500bn yearly provision since 2015 to N30bn, his government remained committed to ensuring the equitable sharing of economic prosperity.

He said, “Our focus on inclusive growth and shared prosperity underscores our keen interest in catering for the poor and most vulnerable.

“Accordingly, we are revamping and improving the implementation of the National Social Investment Programme through the newly created Ministry of Humanitarian Affairs, Disaster Management and Social Development.

“The National Social Investment Programme is already creating jobs and economic opportunity for local farmers and cooks, providing funding to artisans, traders, youths, and supporting small businesses with business education and mentoring. The provision of N65bn for the Presidential Amnesty Programme has been retained in the 2020 budget.”

To fast-track the rebuilding efforts in the North-East region, he  said N37.83bn had been made available for the North East Development Commission.

He also said the government had sustained “accretion to our external reserves, which have risen from $23bn in October 2016 to about US$42.5 bn by August 2019,” adding that the increase was due to favourable prices of crude oil in the international market.

Based on the parameters, he said his government projected a deficit of N1.918tn or 1.37 per cent of the GDP.

He said, “This revenue performance is only 58 per cent of the 2019 budget’s target due to the underperformance of both oil and non-oil revenue sources.

“Specifically, oil revenues were below target by 49 per cent as at June 2019. This reflects the lower-than-projected oil production, deductions for cost under-recovery on supply of Premium Motor Spirit, as well as higher expenditures on pipeline security/maintenance and Frontier exploration.

“Daily oil production averaged 1.86 mbpd as at June 2019, as against the estimated 2.3 mbpd that was assumed. This shortfall was partly offset as the market price of Bonny Light crude oil averaged $67.20 per barrel which was higher than the benchmark price of $60.”

Speaking on the draft Finance Bill, Buhari said the legislation “proposes an increase of the VAT rate from five per cent to 7.5 per cent.

“As such, the 2020 Appropriation Bill is based on this new VAT rate. The additional revenues will be used to fund health, education and infrastructure programmes. As the states and local governments are allocated 85 per cent of all VAT revenues, we expect to see greater quality and efficiency in their spending in these areas as well.

“The VAT Act already exempts pharmaceuticals, educational items, and basic commodities, which exemptions we are expanding under the Finance Bill, 2019.”

He listed items exempted by Section 46 of the Finance Bill  as the Brown and white bread; Cereals including maize, rice, wheat, millet, barley and sorghum; Fish of all kinds; Flour and starch meals; Fruits, nuts, pulses and vegetables of various kinds

Others are roots such as yam, cocoyam, sweet and Irish potatoes; Meat and poultry products such as eggs, milk, salt and herbs of various kinds and natural water and table water.

He said, “Additionally, our proposals also raise the threshold for VAT registration to N25m in turnover per annum, such that the revenue authorities can focus their compliance efforts on larger businesses thereby bringing relief for our Micro, Small and Medium-sized businesses.

“It is absolutely essential to intensify our revenue generation efforts.

“That said, this administration remains committed to ensuring that the inconvenience associated with any fiscal policy adjustments, is moderated, such that the poor and the vulnerable, who are most at risk, do not bear the brunt of these reforms.”